“Fly by ” from ducks

From the age of fourteen, Peter Brouwer worked at an art dealership in Utrecht. There he met painter John Bévort (1917-1996). Then John taught him the art of painting. Moreover, Peter went to study with painter Cor van Diggelen (1921-1989). In the evenings he went to the Artibus Academy in Utrecht, where he was taught by Henk Bellaard (1896–1975).
After he returned to Amsterdam he received a preliminary education from his uncle, in order to be able to go to the Rijksacademie. His military service prevented this next step.
Moving to Schoorl
After his military service, Peter Brouwer lived in Utrecht with the family of John Bévort. Then they bought land in Schoorl together in 1960, to build a house and studio on it.

When John Bévort died in 1996, he found it difficult to cope with this loss. That is why Peter Brouwer decided to move to Sneek together with his wife Tineke in 1997.
In 2010 he passed away as master of the palette knife.  Peter has painted the following subjects, among others: flower still lifes, church interiors, cityscapes,
harbor views, dune landscapes, seascapes, forest landscapes and lake views.

Peter Brouwer was a member of the International Organization of Free Art (IOAF). 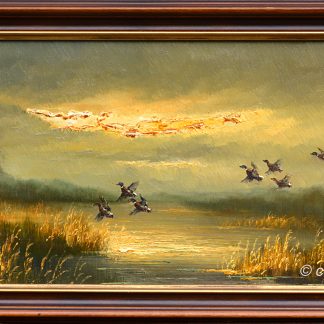