Used his synoniem Camprio during his time in Italy.

John was a student at the Artibus Academy in Utrecht. There he was also taught by the well-known industrial artist Cris Agterberg (1883-1948).
After the war he had his own gallery in Utrecht and his studio in the basement. But after a while he no longer liked business life, because he only wanted to paint. He therefore bought a piece of land in the village of Schoorl (North Holland) in 1960, together with Peter Brouwer.  Peter was also a painter. He was also a good friend and former student of John.

Bévort was an impressionist, because he mainly worked with a palette knife. John is best known for his naturalistic landscapes, such as; hunting scenes, beach and seascapes. He has also painted other subjects, for example; cityscapes, lake views, sailing ships and church interiors. Because of his holidays in Spain and Italy, he also painted Southern European scenes under the nickname “Camprio”. At the beginning of his painting career, he was also temporarily called Jan Bévort. He gained international fame with exhibitions in Europe and in the United States. John Bévort was a member of “the International Organization of Free Art”. He also taught the well-known painters Peter Brouwer and Gerard Ernens. 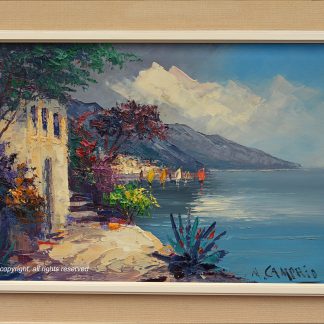 You're viewing: Mediterranean views I €749.00
Add to basket