View basket “Mills in landscape” has been added to your basket.

Hendrik Dirk Kruseman van Elten was trained by the Haarlem painter Cornelis Lieste, a student of B.C. Koekoek (1803-1862). In the same town, he also followed from 1845 to 1849, teaching by Jan Reekers at the city school. He developed into a landscape painter. Between 1853 and 1861 he lived alternately in Amsterdam and Oosterbeek. He traveled Germany, Switzerland and Tyrol. He also spent some time in Brussels, where he was a member of the “Société d’Artistes Belges”. In 1865 he settled in New York, where he became known as an etcher. Around 1870 he returned to Europe for a short time for a journey through Belgium, Germany, France and England. In 1897, after a 32-year stay in America, he returned permanently to Europe. He settled in Paris, the city where he died in 1904. 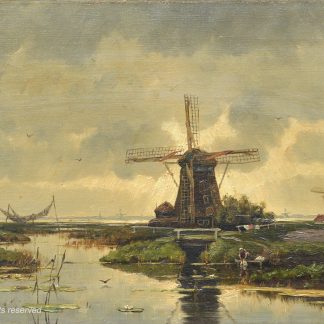